by Erin | Jul 13, 2020 | Book 1: Chapter 1 - “THE ORDINARY MAN LOOKING AT A MOUNTAIN IS LIKE AN ILLITERATE PERSON CONFRONTED WITH A GREEK MANUSCRIPT.”, Interludes | 0 comments

Professionally recorded version of this story available for free now! ^^^

“Kiva, can you just -” Hiroaki rolled his eyes, “Just do what he’s asking you to do?!”  He glared at the copper-haired man standing next to him, who was wearing a smirk and a menacing glint in his fiery mahogany eyes.

“You know me better than that,” Kiva said, clearly with no intention to behave himself.  “This is ridiculous.”

“All you’ve gotta do is not smile,” Diamanta snapped at Kiva.  She brushed her dark hair forward again so that it lay properly.  She pursed her full lips.  “Then, we can get out of here and go get a drink.”

“Why do they make us do this shit when we’re here?  I fucking hate being home,” Kiva complained.  “Oh, great, here he comes.”  Kiva waved his hand dismissively toward the photographer.

The frustrated photographer was walking back from his five minute break.  Hiroaki, Kiva, and Diamanta turned to face him.

“I could make him care,” Kiva whispered.  Hiroaki thumped him in the ribs with a fist – not very softly.

“This is the job, we have to get it done,” Hiroaki admonished him.  Kiva rubbed his ribs gingerly.

“Ow, come on, Aki, you don’t have to resort to violence,” Kiva mocked him.

“Watch it or the next one’s lower,” Hiroaki pointed a finger at Kiva.

Kiva leaned a little closer and mumbled, “Save that for later.”  Aki narrowed his eyes and scowled at Kiva.  Diamanta chuckled.

“Really though, let’s do this, boys,” Diamanta said and gestured toward the greenscreen.  The photographer waited with his arms folded, a gravely annoyed expression on his face.  They took their places, Aki standing in the front with his arms crossed, Diamanta flanking him on the right and Kiva on the left.  Kiva kept a small smile plastered on.

“TAWNEY!  Get that fucking smirk off your face!” The photographer’s face was red with fury.

“Just edit it out in post!” Kiva retorted, and raised a middle finger to the photographer.

“Your superior will hear about this,” the photographer said, pithy.

“Add it to the fucking list, buddy,” Kiva posed and grinned, “Now take the fucking picture.”

“It doesn’t make you sick, being used like that?” Kiva asked Aki.  They sat at a worn wooden table, on high-backed wooden benches.  This was their favorite bar, a veteran-owned and military-oriented establishment.  A place they could relax and not be bothered by the press or the public.  Various vintage recruitment posters hung on the wall.

“Recruitment is part of the job, isn’t it?” Aki said, and sipped his beer.  “They made us into figureheads.  That’s just how it is.”

“You know they call us Team Throwback, right?  The public and our brothers in arms,” Dia swished her scotch in its glass.  A fresh, un-lit cigar sat near the glass.  “Just to attract primal people with the illusion of glory.”

“Of course, but don’t you think other primals need to know there’s a surefire path to Aequalis?”  Aki, ever the patriot, refused to consider any sinister motives on the part of the Army.

“There are plenty of paths to Aequalis, Aki,” Kiva said seriously, “But this one ends in a pretty high mortality rate.  They’re using us, KMA graduates, to recruit grunts.  We’re pilots.  They invested a lot in us; pilots don’t die often.  Primals also don’t get to be pilots often.  It’s more likely they’re recruiting throwback grunts to eliminate them from the gene pool.”

“That’s absurd!” Aki protested.  “What kind of dystopian shit have you been reading?  ShadSo has always maintained that all humans have the rights of Aequalis if they can prove their worth.”

“I don’t think there’s ever been a society in human history that wasn’t a dystopia,” Kiva said, and finished off his beer.  “And you know I don’t believe in ShadSo any more than I believe in the old Christian sky dad.”

“Watch what you say,” Dia hissed, jokingly, shushing Kiva with a raised hand.  “There are ears here.”

“Right, the Dominion is not a dystopia, but the pinnacle of humanity,” Kiva sighed.  “I’m getting another, anyone else?”

“I’m good,” Aki and Dia said in unison.  Kiva shrugged and stood.  He pulled his cigarette case out of his pocket and took out one of the thin brown cylinders.  He lit the cigarette and took a drag.

“All I’m saying is you shouldn’t take it so seriously, Aki – you’re serving an imaginary emperor nobody’s ever even seen, in the name of what?”  Kiva stuck the cigarette between his lips.

“Human advancement, the perfection of our species,” Aki stated, as if it were obvious.  “The Insurrection wants to drag us all back down to base primality.”

“Primality, what, like me and Dia?  Sometimes I don’t know that you really think about what you’re saying,” Kiva teased him.

“Ugh, why are you even in the Army, Kiva, if you don’t care about the pursuit of human perfection?” Aki grumbled, his gaze flinty, threatening.

Kiva put both his hands on the table and leaned down close to Aki’s face.  The smoke from the cigarette was cloying and acrid to Aki’s nose.

“You know damn well why,” Kiva’s eyes twinkled and his lips curled in an impish smile.  Aki’s eyes softened and the corner of his mouth twitched.  Anyone who was unfamiliar with them would have taken their exchange as genuine conflict.  Dia, however, knew better.

“It’s ‘cause he wants your diiiiiick!” Dia exclaimed, then downed her scotch in a gulp and slammed the glass down.  “Now I need another drink.”  She picked her cigar up, jammed it between her teeth, and grinned.  She got out of the booth by climbing over Aki.  Kiva lit her cigar for her.  Kiva wrapped his arm around the much shorter woman’s waist, and growled at her, while shooting Aki a taunting glance.  Aki raised one eyebrow and bit the corner of his lip just slightly.  Kiva looked up to the ceiling, rolled his eyes heavenward, took another drag, then swept Dia toward the bar.

Aki leaned on the table and watched them at the bar.  Kiva flirted with the bartender, as usual – she blushed and giggled, as usual.  A cloud of smoke rose from Dia as she puffed her cigar.  Kiva paused for a moment, raising a communicator to his face.  A beep came from Aki’s pocket.  He fished his comm out of his pocket and looked at the screen.  He read the message and laughed.  The message had something very specific to do with vengeance for that thump in the ribs earlier in the day.

“Hey, get me another beer after all,” Aki said to the comm, and pressed send.

*Already ordered it,* came Kiva’s prompt reply.  Aki leaned back in the booth and smiled. 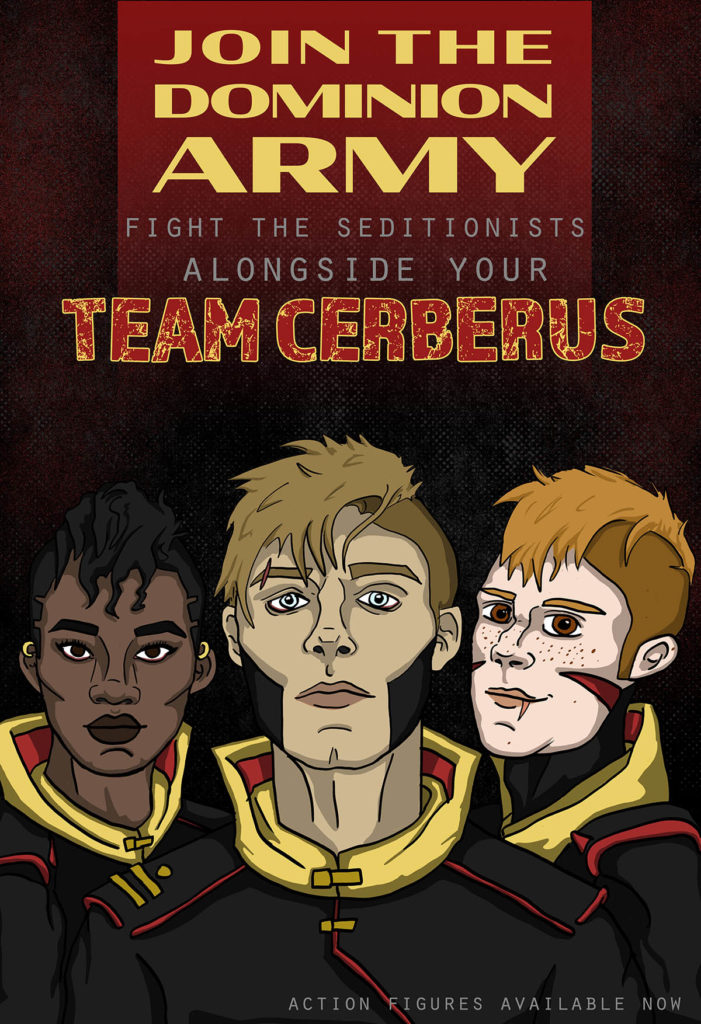