Chapter 3 Interlude 2 – The Rake at the Gates of Hell 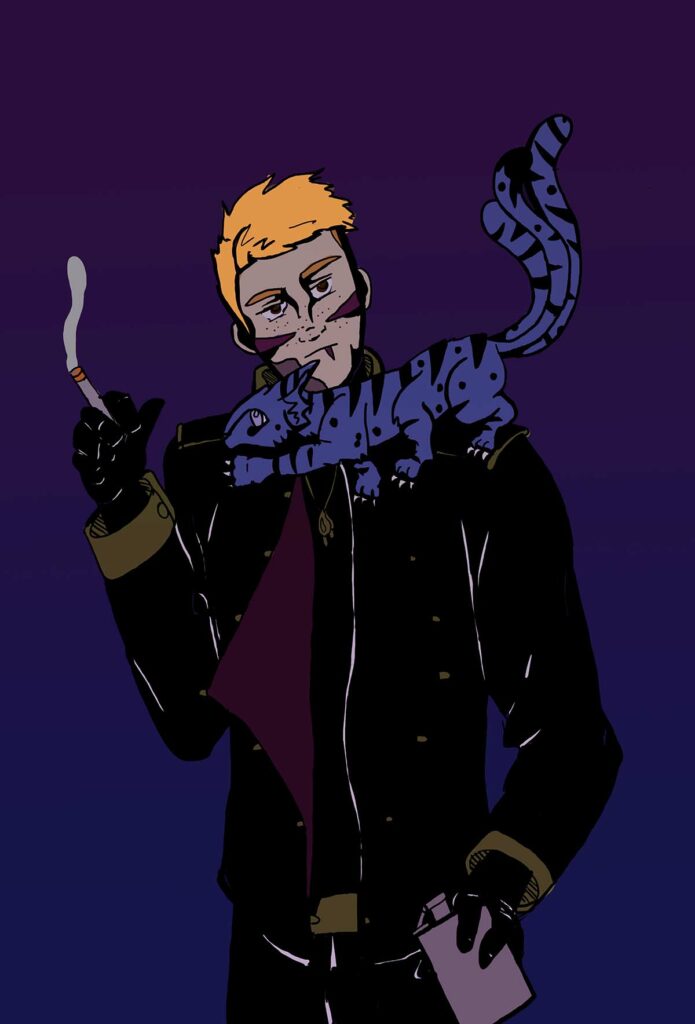 I sat on a log, with a cigarette and my flask. A blue log, with a strange luminescent pseudofungus lining the broken edges. Everything out here was blue. I sighed, and sipped from my flask. I’d brought a full bottle of quality Earthen spirits with me – I knew I’d need it. I’d also brought a great deal of cigarettes. After the fight, I had left my Grendel, but only made it a few steps away before I collapsed on the log, in a black mood. Looking around, everyone seemed to be waiting. My mind was fuzzy, and I decided to just stay put. I was so sick of this shit. I just wanted it to be over, whatever that ended up looking like. My mood was as dark and cold as the night, but I didn’t feel much of anything.

I brooded on the log, entertaining thoughts of myself being immolated and my ashes blowing away. Just like my parents. It had almost happened to me, too. Another pull from the flask, and then a draw on my cig. Alternately, thoughts of bashing Aki’s head against Hertha’s red dirt until his face was covered in bloody mud. I sipped the flask again, and snorted like an angry bull. I knew I was out of control, but I couldn’t do anything to pull myself back from the edge. Gods of man, I wanted to destroy him. The fury consumed me, leaving me with an empty chasm in my chest.

All my life, I’d spent my free time studying the myths and theologies of Old Earth. I had been raised as a Catholic Christian. Everyone in the Seanachie High Families was. The Families hid the religion from the rest of Dominion society. The Dominion was not hospitable to Believers of any flavor. The Christian Bible itself was outlawed, as were the Koran and any other Abrahamaic texts. We had copies of the Bible that circulated the Tawney family, but they always rested safely out of sight. Even with all my upbringing, my study, and all my searching, I had found no teachings that could give me peace with my current situation. My fury was too strong for Buddhist detachment, my pain was too fresh for Christian forgiveness. In those moments, I felt most closely akin to ancient pagan sentiments of revenge.

Dia walked by and threw my field jacket at me. She sniffed loudly, said, “Don’t catch a chill out here,” then stalked past. I wasn’t sure what her attitude was about, but no sense wasting her effort, so I pulled the jacket on. I was adjusting the collar when I felt the log shift. I looked down, to see a shadowy blue face with shining eyes staring up at me. The creature blinked, then scuttled forward and rested two of its six legs on my thigh. A risurisu. Tawney Hills had been full of them; they had especially taken to the cultivated Earthen areas and been a nuisance in keeping the ecosystem balanced.

I like animals. I have always liked animals. I grew up surrounded by them. People close to me remark that it is odd for me to have an affinity for them, since I am diagnosed with a supposed lack of empathy or conscience. Animals make sense, though – they’re simple, they don’t judge, and their motivations are usually honest. And a non-human animal has never left me to die in flames.

“Hello,” I said to the risu. It twitched its tails and started to crawl up the front of my jacket to where my hands were frozen on my collar. Its nose bumped my hands. Clearly, it had learned to associate human hands with some kind of reward. Hoping the creature would not react with violence, I wrapped my hands around its torso and lifted it off my chest. I set it back down on my thigh. It chittered amicably, ears and tails fluttering. Its huge eyes stared up at my face as it tried to scale my chest again. I set it back down once more, and pressed a fingertip to its nose.

“Stop it,” I told it. “You can sit there.” The risu paused, then was about to ascend my jacket again when a deep voice boomed out next to us.

“Jeremy,” he said, “Stop bothering him.” The risu looked to the newcomer, and settled down on my thigh immediately. A huge, dark-skinned man stood with his arms folded, glaring down at the blue animal. He was definitely no Optimal.

“So he has a name,” I mused aloud. “How did you end up traveling with such a friendly risu?”

“Aeliana has a heart for animals,” the man explained. “We were in a village when she found this one, in a cage with two others, ready to be spit and roasted. ”

I grimaced. I had not eaten flesh since I was 14. I glanced at Jeremy. I knew the realities of the world, but I could not imagine him on a spit. He cheeped and fluttered his tails again.

“So she, what, liberated them? And who named him Jeremy, of all things?” I asked. I eyed the man. He loomed over me. He was built like a brick shithouse, as they used to say on Old Earth. There was no expression on his face.

“Well, she tried,” the man sighed. “Most of Hertha is not ready for her vision, only the Children. The fools laughed at her for trying. In the end, Champion Hiroaki had to spend his last coins to buy them from the cage. Champion Hiroaki also chose names for the risus.”

“Champion?” I scoffed. “Champion of what?” What the hell had Aki been getting into? He had only been gone a few weeks.

“Champion of the Mother, of course. Aeliana named him so. Here, I will take Jeremy back to the others and leave you in peace,” he said. He started to reach for the risu.

“No,” I said after a moment. “He can stay. I could use his sort of company.” The risu was a comfort. Animals, I understood. Nothing else about life made sense, but I could handle one little blue risurisu. He was a tiny pinpoint of light in the empty chasm.

“Suit yourself. Hopefully the others will return soon so we can be on our way, we are in no state to be caught out by the Army,” he said. “Until tonight, it was you we were fleeing. Now, I fear it will be worse.”

“Yeah, there’s no point in even staying in the Grendels to fight,” I said, “They’re too beat up. It would be safer to be taken without a struggle, at this point. They’re going to send all of Hell after us now.” It really did seem like we were at the gates of Hell, waiting for retribution to rush out, screaming for our blood.

The man grunted and turned away.

“I am Ephraim Saint, by the way. I am told you are Kiva Tawney. Of course, everyone in the Dominion knows who Team Cerberus is. I hope we are on our way, soon. ShadSo will want your blood for this.” He strode away. Gods of man, the guy was huge. I hadn’t noticed the shock hammer he was carrying at his hip until he shouldered it. No wonder he was huge, hammer guard were all enormous. And the Dominion’s hammer guard had been the bane of our existence in the fight – until James started shooting them out of nowhere … Gods — where was James?

I leaped up from the log, sending Jeremy tumbling with a chattered protest. I raced across the clearing to Dia, who was staring up at her battered Grendel.

“Easy,” she relented, and rested a hand on my forearm. “He’s alright. He went with that silver chick to track down Aki. Everything happened so fast, he just went. I’m sure he would have checked in with you if he could have.”

“Yeah,” I breathed. Relief. Why had I waited so long to think of him? I cursed myself, frustrated by my own deficiencies. I should have been looking for James the moment the battle ended. Instead, I was obsessed with Aki. James was the one who deserved my consideration; he had stuck with me through everything.

“You alright, Kiva?” Dia steadied me with her grip on my arm. I had never allowed her to call me Liam, even though we were close enough to warrant it.

“I know, babe,” she squeezed my arm. “I got you. James will find Aki for us. We’ll sort it all out, one way or another.”

I nodded. I felt a tapping at my boot, then a stronger pressure. I looked down – Jeremy. The risu began to climb my boot, then up my leg to my knee.

“I think you have a friend,” Dia said. She stepped back. She was not so comfortable with animals. Jeremy clambered higher, scrambling up my hip, to my back and then onto my shoulder. He jabbered incoherently.

“Somebody has to,” Dia said, with what sounded like affection. I knew she had gone on this mission for me – well, both of us. She needed to meet her own reckoning with Aki’s abandonment, but she also wanted to support my need for answers. Our relationship was complicated – close, even sexual at times, but combative. Aki was our anchor, and he was adrift. Without him, we didn’t quite know how to interact with each other. An amazing woman, Diamanta Eglan. If only she didn’t have the habit of making me so angry.

Dia squeezed my arm one more time, then turned back to inspecting her Grendel. I remembered the burning cigarette in my fingers and took a draw. Jeremy reached for it, and I held the cig out to the side where he couldn’t get to it. One more pull on the flask – empty. I grumbled.

“Come on, Jeremy, let’s get a refill,” I muttered. It was going to be a long night.