Chapter 2 – Interlude – Everyone Needs a Friend 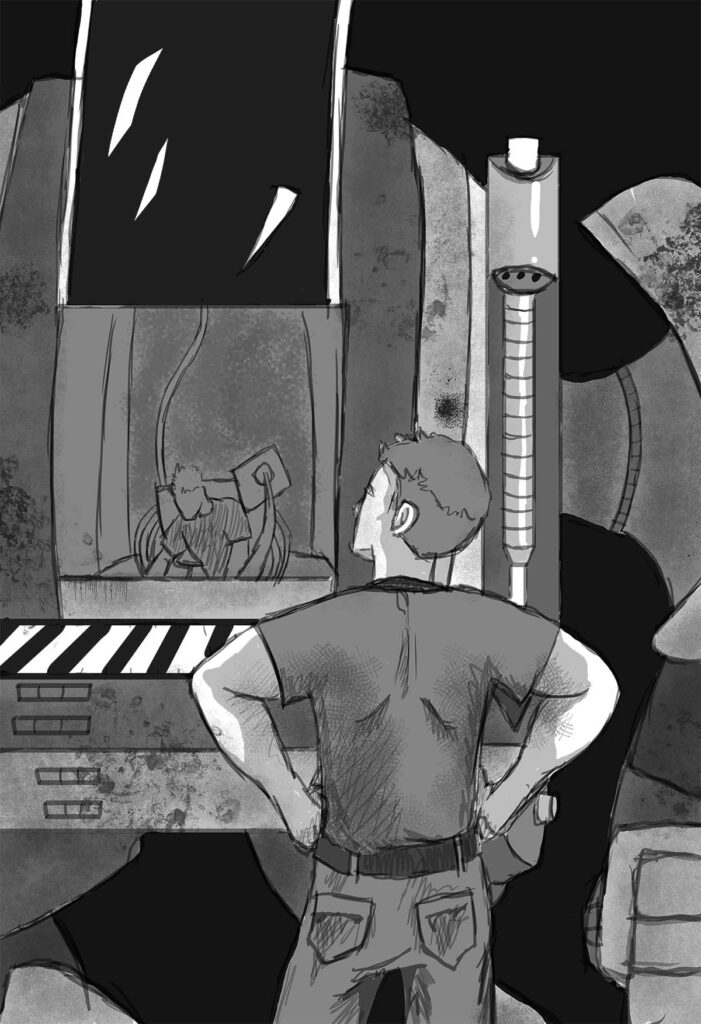 James Olivieri stood at the foot of Kiva’s GRN-93 Grendel, looking up toward the cockpit.  The machine resembled an Old Earth gorilla, hunchbacked with two short back legs and long arms with articulated hands.  To either side of the cockpit were the retracted barrels of scatter guns and flame cannons.  James had no idea what Kiva was doing inside the cockpit, or why it was taking so long.  At this point, he was getting frustrated.  The garage was deserted, save for the two of them.

“Kiva, I’ve checked and rechecked everything.  It’s my job.  Torc is fine, all fixed.  Y’need to get some sleep,” he called up to the copper-haired man who continued to ignore him.  I need some sleep too, for that matter, he thought.  The hell is he doing?

“If you don’t come down in a minute, ‘m going up there t’ get you,” James warned him.  He knew Kiva’s mental state was tenuous; it had only been three weeks since the horrific incident that had left Kiva broken and burned.  The Insurrection’s otherwise feeble attempt to retake Shinchaw City had hit Cerberus hard.  Kiva’s golem, Torc, had been crushed and almost obliterated by an Insurrection golem.  Aki Yeo had arrived just in time to pull the enemy Opal off with his Grendel.

Then, Aki rushed down from his Grendel in the midst of active fire, seemingly to pull Kiva out of his smashed cockpit.  But, in an action witnessed by many, and understood by none, Aki looked into the flaming cockpit, then backed away several paces.  He turned, returned to his Grendel, and ran north out of Shinchaw City.  He had ignored all comm channels, and he had ignored his personal comm.

Kiva was rescued at the last moment by the third member of Team Cerberus, Diamanta Eglan, who grasped Kiva’s body with her Grendel’s hand and extricated him roughly from the cockpit, breaking bones in the process but preserving him from the consuming flames.  Kiva had spent much of the past weeks in Kinnomori City Central Hospital, recovering from smashed ribs, a shattered arm, and burns that ranged over his right arm, shoulder, neck and face.

James sighed, and started up the ladder.  He and Kiva had been bunkmates at Kinnomori Military Academy, and remained closer than friends thereafter – not an uncommon type of arrangement in Dominion society.  Despite the late hour, James had no intention of leaving Kiva to his own devices.

James pulled himself up onto the shallow ledge in front of the cockpit, and balanced himself with the handhold.  He looked down at Kiva, who sat in the pit, on the padded control chair.

James reached and grabbed Kiva by the collar, tugged him.

“You in there?” James demanded.  Kiva’s ‘episodes’ were known only to his closest friends.  James sincerely hoped this was not one of them, or –

“Stop it,” Kiva grumbled, and pushed James’ hand away.

“I’m fine,” Kiva said, his voice cold.  He clenched and unclenched his fist, in the Grendel’s control sleeve.

“That’s a lie,” James remarked.  He rested his hand on Kiva’s shoulder.  “Come on, you need to sleep.  Dawn’ll be here sooner than you think.”

“Alright,” Kiva sighed.  “Get out of the way, then.”  James squeezed Kiva’s shoulder, then climbed down onto the Grendel’s arm, and down the last few steps to the concrete floor.  Kiva followed, slowly.  James turned to gather his jacket and bag from the middle of the garage.  He heard Kiva’s boots hit the floor.  He looked back for a moment, and saw Kiva holding himself up against the Grendel’s arm, his head bowed.  His pink burn scars were livid against his otherwise tattooed black arm and neck.

I could kill Aki myself, James thought, a flicker of anger rising. Good thing I drive the pack mule, don’t think I could hold back if I had a combat machine.

James picked up his things, and met Kiva walking toward the garage exit.

“Where is everybody?  Kalliavas and them?  The garage was full before I went up.” Kiva thumbed backward toward the lines of golems.

“They all left ages ago.  You were in there for hours.  I caught up on the damn dictionary, waiting for you,” James complained.

A few moments of silence, then James spoke.

“I don’t want to do anything…” Kiva trailed off.

“That’s not all I am!” James exclaimed, stopping in his tracks.  Indignantly, he spat,  “You know that.”  Kiva glanced at James, saw in his green eyes that he was barely holding fury at bay.  The last time Kiva had offended James, it hadn’t ended well.  Kiva’s crooked nose still bore the result.  Kiva ran his fingers back through his copper hair.  He grimaced.

“I know.  Sorry.  You of all people deserve better from me, James,” Kiva said – an unusually selfless statement, coming from him.  James frowned, not sure how to take it.  As though a switch flipped, Kiva suddenly relaxed.  “Yeah.  I’d like your company, though I’m not much, myself.”  Kiva wrapped an arm around James’ shoulders.  James clapped him on the back.

((Hope you enjoyed meeting James.  You have now become acquainted with all five of our mains.  Good for you.)) 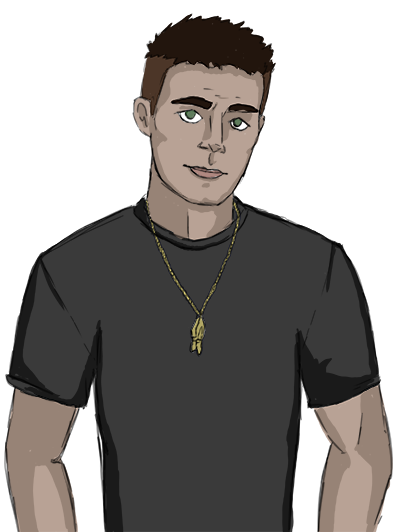